UBC Library’s annual Senate Report (2019/20) is now available. Read our highlights from the past fiscal year which include advancing research, learning and scholarship, engaging with communities, creating and delivering responsive collections, inspiring with innovative spaces and services, and stewarding the organization.

Michael Layland wins the 2020 Basil Stuart-Stubbs Prize for his celebration of the richly diverse flora and fauna of Vancouver Island. 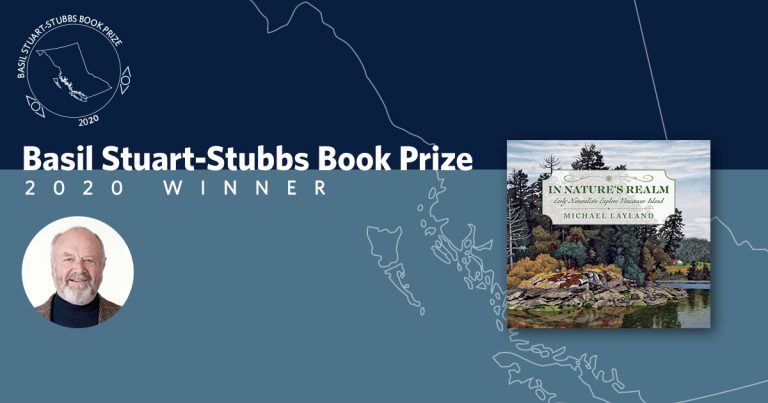 Michael Layland has won the Basil Stuart-Stubbs Prize for outstanding Scholarly Book on British Columbia for his book In Nature’s Realm: Early Naturalists Explore Vancouver Island. The $2,500 prize, given by UBC Library and the Pacific BookWorld News Society, will be awarded at UBC’s Irving K. Barber Learning Centre later this year.

Published by Touchwood Editions, Layland’s book explores the richly diverse flora and fauna of Vancouver Island through the records of explorers, settlers, and visitors, and with due respect to the wealth of Indigenous traditional knowledge of the island’s ecosystems.

“Since moving to Vancouver Island nearly 30 years ago, I’ve been fascinated by the island’s rich history, in particular during the eras of exploration and early settlement,” says Layland, “In Nature’s Realm combines my twin passions of history and nature, and complements my two earlier books. It tells how the Island’s flora and fauna appeared to the naturalists among the explorers and early settlers. It shows how their understanding was constrained by limited time and equipment, as well as the political motivations of their sponsors. In telling the story, I pay tribute to the Island’s original naturalists, the Indigenous Peoples, whose knowledge is at last being ‘discovered’ and appreciated.”

“This masterful book is remarkable in its physical appearance, and based on consummately executed research and investigation”, says Dr. Susan E. Parker, UBC’s University Librarian. “We are thrilled, once again, to highlight the fine work of an author from British Columbia.”

Trained as an officer and mapmaker in the Royal Engineers, Michael Layland was president of the Victoria Historical Society, the Friends of the BC Archives, and is an amateur naturalist. In Nature’s Realm is a companion volume to his two previous titles: A Perfect Eden: Encounters by Early Explorers of Vancouver Island and The Land of Heart’s Delight: Early Maps and Charts of Vancouver Island which detail the progression of European knowledge of Vancouver Island.

Shortlisted titles for the prize are:

At the Bridge: James Teit and an Anthropology of Belonging , Wendy C. Wickwire (UBC Press).

Against the Current and Into the Light: Performing History and Land in Coast Salish Territories and Vancouver’s Stanley Park,  Selena Couture (McGill-Queen’s University Press).

The Basil Stuart-Stubbs Prize for Outstanding Book on British Columbia, sponsored by UBC Library and the Pacific BookWorld News Society, recognizes the best scholarly book published by a Canadian author on a B.C. subject. The book prize was established in memory of Basil Stuart-Stubbs, a bibliophile, scholar and librarian who passed away in 2012. Stuart-Stubbs’s many accomplishments included serving as the University Librarian at UBC Library and as the Director of UBC’s School of Library, Archival and Information Studies. Stuart-Stubbs had a leadership role in many national and regional library and publishing activities. During his exceptional career, he took particular interest in the production and distribution of Canadian books and was associated with several initiatives beneficial to authors and their readers, and to Canadian publishing.

The Wallace B. Chung and Madeline H. Chung Collection exhibition at Rare Books and Special Collections has welcomed its 10,000th visitor!

The Lillooet Room, part of the Chapman Learning Commons in Irving K. Barber Learning Centre, has been renamed the Antonio and Marissa Peña Learning and Events Room. 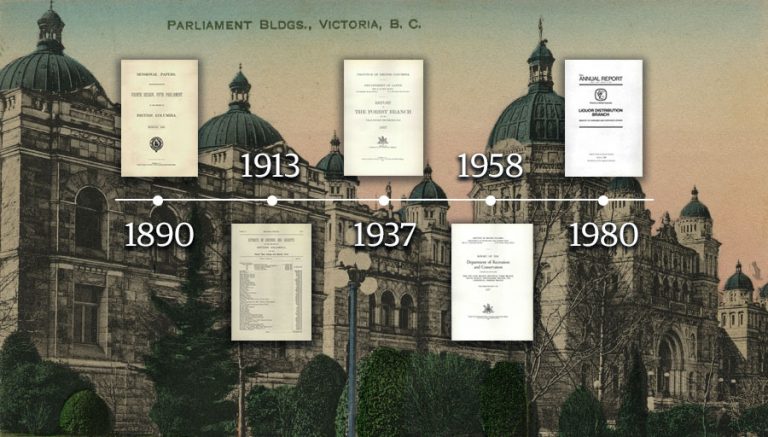 The collection, which now includes over 4,000 items in total, highlights the cultural, economic, social and political atmosphere of their historical era and are being used for research in multiple fields.

“Annual reports within the Sessional Papers have helped answer reference questions about the history of public schools in British Columbia, road and infrastructure policies of the 1940s and 1950s and relations with the provincial government and First Nations Peoples,” notes Susan Paterson, Government Publications Librarian at UBC Library. “The project has also been used by researchers outside of UBC including Canadian federal departments, law firms, and independent researchers.” Digital Projects Librarian Eirian Vining confirms the relevance of these papers to broader researchers: “We also see a lot of genealogists using these materials because of the voter lists contained within them.”

Andrea Lister, Editor of British Columbia History Magazine uses the records regularly for fact-checking and appreciates the increased accessibility, “The collection allows researchers, regardless of location, access to records that allow for analysis of the political, historical, economic, and cultural history of British Columbia.”

An eye to preservation

The project has also enabled UBC Library to better preserve the collection. “This collection is not easily browsed,” says Vining, “So, now it can be accessed more frequently and more widely without the worry of wear and tear.”

The collection is well-used with more than 17,000 item downloads and more than 860K item views since its launch and is being used by researchers globally including France, the U.S., Germany, China, Russia and the Ukraine.

UBC Library’s annual Senate Report (2018/19) is now available. Read our highlights from the past fiscal year which include advancing research, learning and scholarship, engaging with communities, creating and delivering responsive collections, inspiring with innovative spaces and services, and stewarding the organization.

The Puban Collection, one of UBC Library’s collections of rare books, was gathered by Chinese physician Junshi Yao during the 1940s and 1950s. This year we’re celebrating the 60th anniversary of the collection’s acquisition by UBC. Spanning 45,000 volumes, the collection is one of the primary resources for Chinese studies in North America. 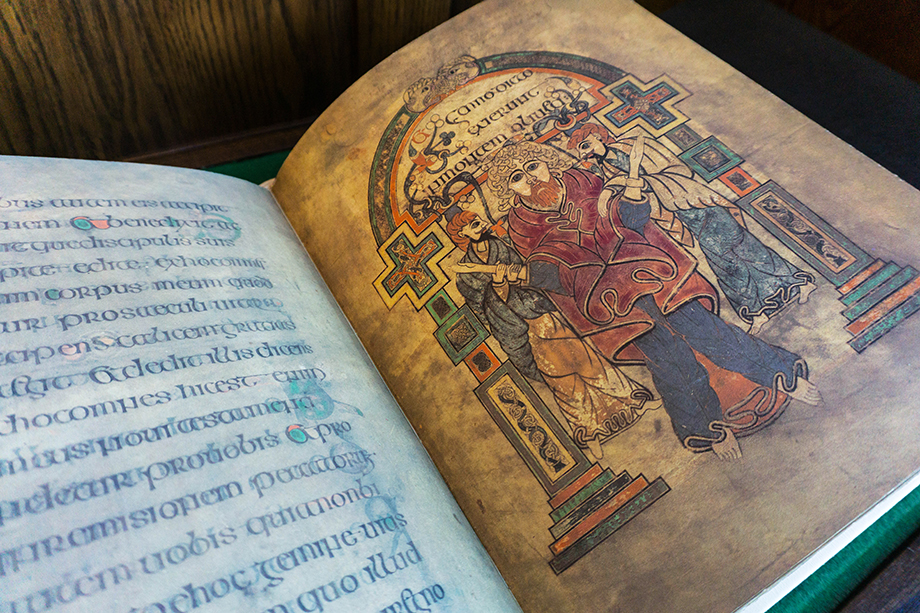 The Book of Kells facsimile no. 349, on display at UBC Library.

The Ridington Room in the Music, Art and Architecture (MAA) Library at the Irving K. Barber Learning Centre has added a new permanent installation that will be of interest to anyone with a penchant for medieval illuminated manuscripts. The Book of Kells facsimile, which was acquired by UBC Library’s Rare Book & Special Collections in 1990, had previously been housed in UBC Library’s Vault, but now resides in a secure, purpose-built display case, accessible to the UBC community.

The original Book of Kells, which is held on permanent display at Trinity College Library in Dublin, Ireland, is a 9th Century manuscript documenting the four Gospels of the New Testament in Latin. Named after the Abbey of Kells, where it was kept for centuries before moving to Trinity College, the manuscript is divided into four volumes. 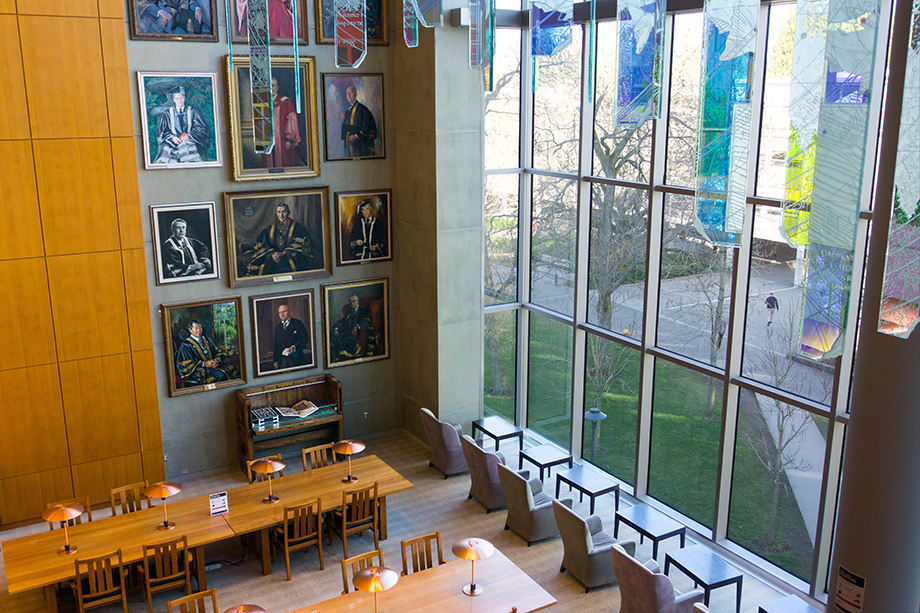 The Ridington Room in the Music, Art and Architecture Library at UBC.

UBC Library’s facsimile of the Book of Kells was produced by Swiss publisher Faksimile-Verlag Luzern in 1979 using cutting edge technology of the time to photograph the original pages and produce a limited run of exact copies. UBC Library’s copy, no. 349, is accompanied by a presentation book from Vancouver’s Book of Kells Committee, which formed in 1987 in order to purchase the item through donor support. The original Book of Kells Committee consisted of 14 members who together raised $16,000 from 340 local donors. A plaque attached to the display case celebrates those who offered their support.

The Book of Kells is available to view during the MAA Library’s regular hours of operation. Check the website to find out more.

Born in Vienna to a Jewish family, Hanne Wassermann Walker left Nazi-occupied Austria in 1938. After living briefly in England, and then in New York, she went on to emigrate to Canada, taking up residence in Vancouver and later North Vancouver with her second husband, George Dickson Walker. She became a resident of British Columbia in 1943.

A well-known figure of Viennese society during the 1920s and 1930s, Wassermann Walker was at the forefront of the Weimar-era body culture movement. Her school of gymnastics and health manuals for women brought her international fame and recognition from reputed medical institutions and clinical specialists. Among her correspondents, friends and students were film stars, artists and members of the European aristocracy, including the Rothschild family, Lady Louis Mountbatten, Helen of Greece and Denmark and actress and wireless communications pioneer Hedy Lamarr.

In 1985, Hanne died without heirs, and items from her estate were acquired by a local collector. In the Fall of 2018, Katherine Kalsbeek, Head of Rare Books and Special Collections, and Krisztina Laszlo, RBSC Archivist were offered first refusal on the archive by a local bookseller. With the support of faculty from many UBC departments, Kalsbeek and Laszlo worked to identify the funds required to ensure that the archive would stay in British Columbia. “The response from both UBC and the larger community has been exceptional,” says Kalsbeek, “From numerous individual donors, to foundations, to key departments here at the university, there has been overwhelming support for our effort to ensure that Hanne’s archive stays in British Columbia.” The library saw generous support from the Azrieli Foundation, Reesa Greenberg and the Clematis Foundation, Lorne Greenberg and the Lorne Greenberg Family Partnership, Anthony von Mandl of Mission Hill Family Estate winery, the UBC President’s Office, the Faculty of Arts, the School of Kinesiology, and the Department of Central, Eastern and Northern European Studies (CENES). 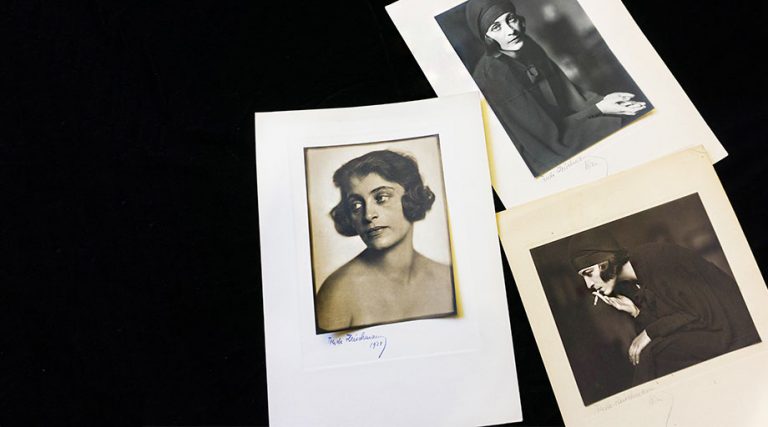 The archive itself is extensive, including an impressive number of documents, correspondence, print media coverage, photographs and artifacts that span over a century.

A large part of the archive documents Wasserman Walker’s struggle to obtain compensation for the loss of her family’s property seized by the Nazis. The archive contains letters from lawyer Gustav Rinesch, informing Hanne of the details of her parent’s estate and his work on her and her sister’s behalf with the government of Austria.

The sheer size and breadth of the archive presents countless unique opportunities for research, teaching and learning in a number of fields from Holocaust studies, and Women’s Studies, to Kinesiology and Fine Art. Krisztina Laszlo, RBSC Archivist, notes that the acquisition of this archive “is an example of RBSC’s effort to increase our documentation of women’s role in history.  Representation of women, and their successes in the life of this province, and the larger world, needs to be celebrated, preserved and recognized.” 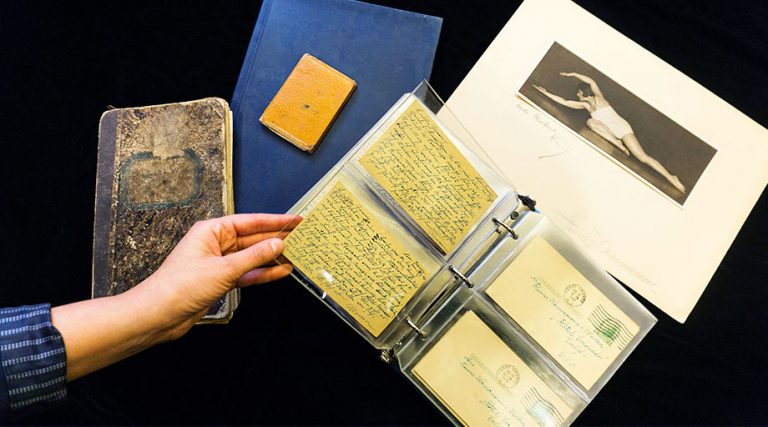 Personal correspondence from the archive.

Dr. Patricia Vertinsky, Professor in UBC’s School of Kinesiology is particularly interested in parts of the collection that involve Wasserman-Walker’s exercise system, “What interests us in Kinesiology is exploring the provenance of these exercise systems and then understanding the way in which Hanne brought them to Vancouver. She spent forty years teaching them, first in Vienna and later in Vancouver in people’s basements and community centres – two completely different worlds.” 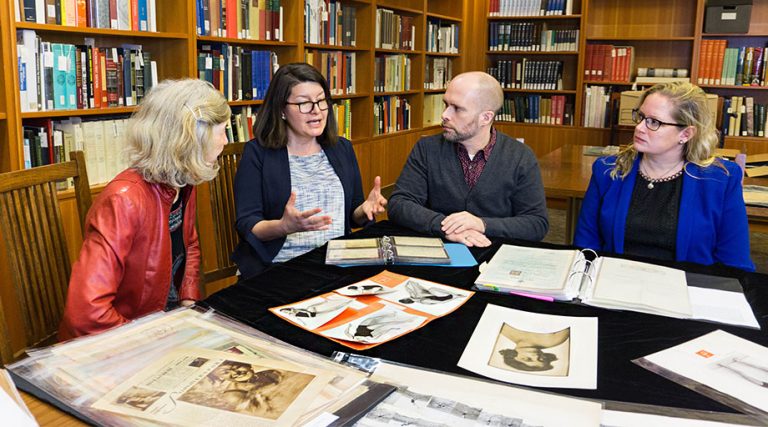 Dr. Ilinca Iuraşcu, Assistant Professor of German at UBC is excited about how the archive will enable young people to understand the importance of women’s history as lived history. “The story that all these material testimonies tell is not merely one about reconstituting a unique biography and exceptional career. This is also a lesson about living cultural networks and building bridges among spaces and histories: Vienna and Vancouver; communities of health and aesthetic practitioners – and the sheer force of connecting the dots between them.”

Perhaps most heartening is that the Library’s acquisition of the full archive prevents the archive from being broken up, divided and sold, which would have meant that the fulsome picture it presents of Wassermann Walker’s life and work would be lost forever.

Learn more about the Library’s Rare Books and Special Collections.

Read more stories about collections, services and spaces on the Library’s About Us blog.

The Library is an integral part of teaching, learning and research at UBC. By supporting the Library, you are supporting research in every field. Explore some of our priority projects.